Our 3rd Future Stars Level 2 Open Meet and another all round success, with 27 of the North West top clubs competing Wigan BEST swimmers excelled themselves with p.b. times being produced by all 30 swimmers competing from the club. In all our young swimmers came away with 75 medals, 33 of which were gold and 13 won in a competition record.

Producing her best performances 12 year-old Melissa Braddock broke Future Stars records in the girls 400 Freestyle powering her way to victory in 4:32.89. in the 200m event 2:11.89 and another meet record then finished with a hat-trick of freestyle gold’s and records took the 100m event in 1:02.63 the challenge then was could she take all the freestyle events pushing hard in the 50m she just missed the record but made it a clean sweep of gold’s finishing first in 28.92. She then went on to show that her butterfly had improved taking the gold in 1:11.48. and silver in the 50 event 32.80. 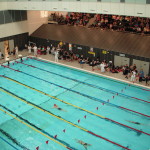 Continuing Wigan BEST dominance of the 12 year-olds was Ellie Molyneux who had a very busy weekend taking the gold in the 200m Backstroke in fantastic 2:30.27, Ellie was pushed hard all the way by team-mate Charlotte Nester who finished in silver 2:30,43 with Katey Cooper finishing a very close 3rd in 2:30.99 another 1,2,3 for Wigan BEST. Ellie Molyneux continued her hectic weekend taking 9 medals in all with victory in the girls 50m Butterfly 32.46 and then went on to snatch the gold in the 50m Backstroke.

Charlotte Nester came back strong to continue the Wigan dominance in the age group with a powerful display in the girls 100m Breaststroke breaking the 1:20 barrier with victory and a new meet record of 1:19,43. Never satisfied Charlotte then produced a pb in taking the 100m backstroke title in 1:11.18 from with Ellie Molyneux in the silver spot.

The boys ensured they where not out done with Harley Beentjes continuing the excellent results for the Borough with 6 medals over the two days taking gold in the 13 year boys 400 freestyle 4:27.78 with team-mate Matthew Silvester taking the bronze 4:34.45. Harley continued his winning ways in the 200m Butterfly 2:26.39.  In the 100 event he managed a great silver 1:06.84 with bronze coming in the 50 breaststroke, freestyle and the 100m freestyle. 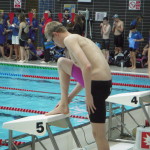 Senior members weren’t going to let the youngsters take all the glory as Dominic Suggitt fought hard against tough competition from City of Liverpool and Southport, Dom is not one for giving in to easily after finishing in silver place 3 times in the 200 IM 100 back 50 freestyle and bronze in the 100 freestyle all in personal best times, he went into the 200m backstroke in determined mood he fought every inch of the way powering himself into a formidable lead he took a brilliant gold in 2:03.73.

Competing in the open girls events Rachel Byrne continued the success for the club finishing with 4 golds two of which where new records and all of which were personal best’s. The 200 IM Rachel showed her determination breaking the 2:20 barrier finishing with a 2:19.22 and new competition best. Her second record and gold came in the ladies 200m Freestyle winning in 2:05.51. Showing her all round talent she went on to win the 100 & 200 Breaststroke. Team-mates Ellie Bailey produced excellent performances in taking the silver in the open girls 100m butterfly and bronze medals in the 50m and 200m Butterfly. Jess Sloan continued her pb form in the girls 100m freestyle finishing 3rd in 59:79 with Holly Jackson showing her sprint talents taking bronze in the 50 freestyle and backstroke.

Golds were still coming Wigan BEST way with 13 year-old Greta Hampson powering her way to victory in the 200m butterfly finishing in 2:35.93.

The junior members of the club were also on form with 10 year-old Jennifer Green taking the glory by becoming the top 10 year-old girl of the meet winning the BAGCAT trophy for the age group. This was made possible in the 200 breaststroke with a fantastic performance finishing with a gold and another new record for the Wigan BEST Team 3:15.88. Liking the idea of gold medals Jennifer then produced another great performance in the 400 freestyle taking the gold again in 5:24.46, from here she went on to add the 200 event to her collection of gold’s. In the 50m event Jennifer finished with a 32.74 and a fine silver to show for her efforts. The 10 year-olds continued to show that they are going to Butterfly 3:08.79.  For the 10 years boys Matthew Gregory showed he will be joining the list of future stars with a tally of 3 medals over the weekend. In the 50m breaststroke he looked powerful down the 2nd 25m and snatched a great gold medal, in the longer 200m event he showed he has the aerobic capacity to keep going when he continued his winning ways with a 3:19.22 victory. Putting all his strokes together he finished a brilliant second in the 200 IM 2:58.55.

9 year-olds were also in the action in the form of Poppy Gorman who showed that she will be joining the Wigan BEST future elite when she took the bronze medal in the girls 200 breaststroke 3:42.53 and then went on to take her second bronze medal in the 200 IM 3:24.55. Jasmin Gower was in excellent form in the 11 girls 200m and 400m freestyle were she had very hard fought race taking the silver medal in both events 2:2647 and 5:07.98 respectively. Sister Amber was not to be outdone she took on the field in the 10 year-old girls 200m butterfly and dominated the race to take a brilliant gold medal.

Without doubt this was a fantastic meet for Wigan BEST with comments from all participating clubs on the way the meet had been organised and delivered by the club. Head Coach Les France stated that this was only possible through the hard work of the parents who put their hearts and souls in delivering a high class level 2 meet which produced a fantastic atmosphere which in turn encouraged all swimmers to produce the level of performance they did. He went on to thank all the clubs who took part for their support and congratulated top club Southport for their performances to take the top club award with City of Manchester 2nd City of Liverpool 3rd with home club Wigan BEST in much improved 4th place.

Wigan BEST swimmers came out on top in the individual age group awards (BAGCATS) this is where swimmers are awarded FINA points for their performances in each race the faster their time the more points they awarded, their highest points in each category are used to give them a combined points total (Categories are Sprint – Form – Distance)

10 year-old Girls title went to Jennifer Green with 1398 points, in the 12 year-old girls the champion was Ellie Molyneux with 2634 points.