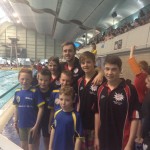 38 of Wigan’s elite swimmers have been competing under the banner of Wigan BEST (Borough Elite Swim Team) at the County Championships over the previous 2 weekends. The marathon event proved to be excellent for Wigan’s starlets who proved that they will be a force to be reckoned with over the coming years. The group who all train with the WLCT Swim Squad came away with a 2 National Qualifying Times and 47 medals, 5 of which where gold, 16 silver and 26 bronze.

The first of the club’s National Times came to 16 year-old Phoebe Vaughan in the ladies 800m Freestyle. Phoebe took her heat by storming ahead to a 25m lead keeping well within her best ever pace finishing in time of 9:20.68 finishing in the silver spot for the junior ladies. Eleanor Bailey will join Phoebe in Sheffield later this year when she achieved her first ever National Qualifying Time in the 16 year-old girls 100m Butterfly, finishing in 1:05.30, and also taking the junior silver for the event.

Event 301 the boys 200m Breaststroke saw the first gold medal come BEST’s way when 10 year-old Samuel Briscoe powered his way down the Liverpool Aquatics Centre Olympic size pool finishing ahead of the rest of the field in 3:17.07 team mate Matthew Gregory made sure Sammy was not on his own on the rostrum when he came in just behind finishing in the Bronze medal spot. Session 4 and the seniors came in with their best performance so far with Dominic Suggitt heading the field in the men’s 200m Individual Medley finishing in 2:12.59.

The third and fourth gold medal’s came from the girls in the form of rising stars Amber Gower and Jennifer Green competing in the 10 year-old girls 200m and 400m Freestyle respectively. Both grils dominated their race with Amber finishing the 200m Butterfly in superb 3:06.71 and Jennifer taking an excellent gold in the 400m event in 5:15.68. National Qualifier Charlotte Nester added the fifth gold to the clubs collection when she outclassed the rest of the field finishing in 36.71 in the 12 years 50m Breaststroke. By this point the rest of the county were talking about the vast improvement the Wigan BEST swimmers had made over the previous 12 months.

As the event went on it was obvious that the swimmers from Wigan BEST were on form as medals continued to come their way. 12 year-old Greta Hampson continued the Borough’s affinity with distance swimming when she took an excellent silver on the ladies 800m Freestyle, in the 200m Butterfly Greta added a bronze to her collection. The girls 200m Butterfly proved to be a good event for the Wigan BEST team with 4 medals coming from this one event alone. Joining Amber and Greta on the podium was future star 9 year-old Faye Bayman who took her first County medal a silver in a time of 3:43.28. Faye went on to swim several events just missing out on medal’s until the sprint Butterfly where she came in for her second medal taking the bronze. More medals came to Faye in the 200m Backstroke when she stood on the bronze spot making an excellent 3:15.76 and another bronze came Fay’s way in the 200m Medley.

The 12 year-old girls Charlotte Nester, Katie Cooper and Jasmine Gower had a successful meet with Charlotte Nester adding a fantastic 9 bronze medals in the 200m Medley, Breaststroke, Backstroke and freestyle plus the 100 Backstroke, freestyle, butterfly and breaststroke with the 50m backstroke to her 50m Breaststroke gold. Not to be out done Katie Cooper powered her way to a 2:53.00 in the girls 200m Breaststroke finishing in silver medal position.The 100m event saw Katie take a second silver medal just out touching her team-mate to finish in 1:20.52. Once again the 200m Butterfly proved to be a good event for the BEST girls with Jasmine Gower adding to the 12 years success finishing in bronze place with a time of 2:47.82.

In the mens 100m Backstroke saw two medals added to the collection when 13 year-old James Cross finished in fantastic silver place 1:10.04 with Dominic Suggitt taking the mens bronze 1:00.74. In the 200m event we saw Dom slip back a place to bronze finishing in 2:13.04.

On a high from her first National Qualification Eleanor Bailey added another silver to her bag in the junior 200m Individual Medley, with her third silver coming in the 200m Butterfly. Keeping up the consistency Ellie added her fifth silver in the girls 50m Butterfly.

Senior swimmer Rachel Byrne who is working hard in to next months Commonwealth Trial’s in Glasgow competed in several events taking the bronze in the 200m Backstroke, and went one better in the ladies 200m Individual Medley taking silver in 2:21.34.

The 10 year-olds added another medal to their tally when Katherine Baker took a brilliant silver in the girls 200m Backstroke in a time of 2:54.05. More silvers where added when 13 year-old Ellie Molyneux added a third age group medal to the clubs tally in the 100m Butterfly when she finished in 1:08.69 reducing her lifetime best by 4 seconds. In the 400m Freestyle Ellie swam an excellent race taking the bronze medal, in the shorter 200m event Ellie reduced her best time to take another bronze.

The 1500m Boys swam superb races with Matthew Silvester taking another silver medal for the club finishing in 18:04.60. 14 year-old Harley Beentjes gets ever closer to his National Time finishing in an all time best of 17:40.35.

More medals came to Pheobe Vaughan in the girls 100m Breaststroke taking an excellent silver, in the 400m Freestyle she continued her performance just missing her national time when she finished in bronze place, 15 year-old Jessica Sloan powered her way to a personal best time in the girls 50m Freestyle and took the bronze in the process. In the 10 years Samuel Briscoe added another bronze in the boys 50m Breaststroke.

Wigan BEST and WLCT Swim Squad head coach Les France was over the moon with the swimmers performances and stated it has been a long hard road to move the elite programme forward here in Wigan since the closure of the Wigan International Pool back in 2008, but we are now seeing the results of the hard work that has been put in by the swimmers, parent’s the community swimming clubs WLCT who have supported the programme and all the coaches within the Borough. We have formed some excellent partnerships where the talent is now being spotted and encouraged to follow the pathways that are set. We have a long way to go but the seeds are now beginning to grow with great performances coming from our younger athletes and I look forward  in anticipation to the future.