Following our success at the County Championships last month Wigan BEST swimmers were back in action this time competing in the Level 3 Spring Meet organised by Burnley Bobcats. This meet is always popular mainly due to how efficiently the event is run which goes a long way in helping the swimmers achieve great performances. This year proved to be just as successful with 39 medals coming our way with several achieving their Regional qualifying time along the way.

12 Gold medals were won by BEST swimmers with 9 year-old Poppy Johnson taking home the gold in 3 of her events. Poppy opened her account with a 7 second pb and breaking the 3:00.00 mark in the 200 backstroke her other 2 golds came in the 50 and 100 freestyle. Elise Ainscough and Camilla Holland were definitely on form through the weekend taking 6 gold medals between them for our 10 year-olds. A 12 second drop in her time in the 100 breaststroke gave Elise her first gold. The 200 IM and another massive pb of 10 seconds gave her 2nd gold with her 3rd of the weekend when she powered her way to victory in the 50 Breaststroke. Camilla finish on top spot on the podium in coming home in 1:27.1 in the backstroke, Camilla went on to show her speed in winning the 50 fly and back. 14 year-old Jack Pritchard had his most successful Open Meet to date when finished a double gold medallist winning both the medley events taking 10 seconds off his previous time by 10 seconds in the 400 event. Hannah Lee continued the medley success with a 2:37 in the 13 year-olds 200 IM.

13 sliver medals in total were brought home with Betsy Lloyd in the 10 years-olds taking 5 seconds off her pb in the 100 Freestyle in the 200 event she become a double silver medallist when she finished in the 2nd spot in the 200 event. Esme Cunliffe had a 16 second drop in time to add another second to the tally. Dan Barton was also a double silver medallist when he snatch 2nd spot in the 50 & 100 backstroke in the 11 years age group. Another double silver medallist was 12 year-old Tilly Collins who took just under 6 seconds off her 200 medley time finishing in under 2:50 for the first time. her second silver was in the 100m backstroke. 3 swimmers in the 13 years took 4 silver medal between them with Ethan Arriss-Hayes taking his in the 200 freestyle with a 4 second giving him a time of 2:19 his first time under the 2:20 mark. Avagrace Hodson became another double silver medallist over the weekend taking second in the 50 fly and 100 back. With Jacob Camden adding the 4th silver for the age group in the 50 backstroke. Ruby Sheehan and Jack Pritchard added silver each in the 14 years with Ruby making a 13 drop in her previous best taking silver in the 200 fly in 2:41 with Jack taking silver in the 200 backstroke.

14 bronze medals were taken by BEST swimmers with a 14 second pb gave Ruby Sheehan her second medal of the meet. Jack Pritchard added a bronze in the 200 freestyle finishing in 2:11. Alex Hornby continued his fine form taking bronze in the 100 fly, 5 of our 13 years added bronze to the club total with Anya Jolly becoming another double medallist taking bronze in both the 50 and 200 breaststroke. Further bronze came in the backstroke events with Isla Holland taking the 100 distance for the girls with Jacob Camden taking his in the 200 event. A excellent swim in the 400 IM gave Olivia Harrison the bronze in the senior age group. Tilly Collins added a further medal to her haul with bronze in the 200 back for the 12 year-olds. Yet another double medallist when 12 year-old Thomas Fitzpatrick to the 3rd spot in the 200 freestyle with a 9 second pb time and a 7 second drop in his time helped in take bronze in the 100 breaststroke. Our 11 year-olds were also in the bronze collection with Maisie Lloyd making a 4 second drop in the 200 IM with Liam Smith adding a bronze in the 50 breaststroke.

Well done to all our swimmers who competed a great performance,. A big thank you to our volunteer poolside helpers and Team Managers and of course a massive thank you to Dave for his energy and efforts throughout the weekend supporting and encouraging the swimmers to achieve success. 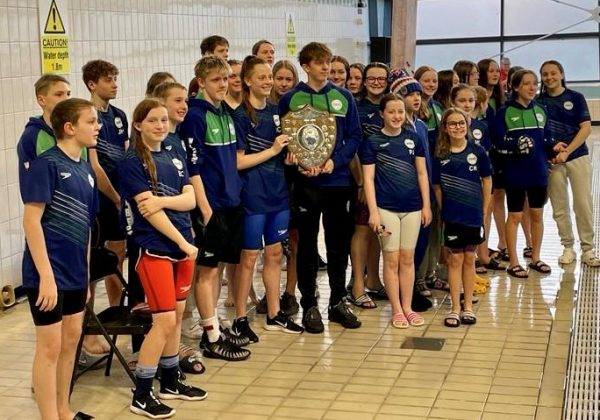